Since we live in a condo, we only control about 10 feet behind our back door. And we have to ask permission to change any of that.

That’s a lot of plants on the deck. It was fantastic.

I love to garden and we’ve had no space. We do have a deck that is rather wonky; the previous owners had a hot tub that was too heavy for it and now it is askew. After a summer when we used it twice, we decided to replace it with raised bedded gardens

When I say we, it is a bit of an exaggeration. I came up with this plan and David was happy to go with it. Mostly he isn’t too invested in the backyard or growing things, but is happy to build things that make me happy. Basically best husband ever.

This is David and this is his garden bed.

I always say I will plant only a handful of things and then I get too excited in the nursery and buy too many plants and go hog wild. I just needed a space that was big enough to put all my plants in it to start. Pretty much I stick to planting vegetables and herbs. Flowers are lovely but if I’m doing all that work, I want to eat it at the end.

We demolished the deck, disturbed a vole nest and dug holes to drop the raised garden beds into. Also do you see how rocky that soil is? It’s awful fill that is almost entirely large rocks. 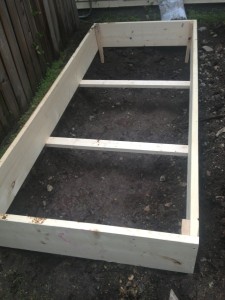 The first bed ready to be filled!

Our original plan was to reuse the wood from the deck for the raised garden beds. However after reading up about it, we didn’t want to use treated wood and risk the chemicals leeching into our soil and our veggies. Dave got untreated cheap wood and built raised beds.

We also lined the beds with garden weed fabric to hopefully keep the chickweed out for a while.

The beds are 4 feet by 10 feet.One was just an empty box and the other had a divider down the middle. The simple box will be veggies and herbs. The divided box will have raspberry bushes transplanted from David’s family’s patch on one side and strawberry plants on the other. 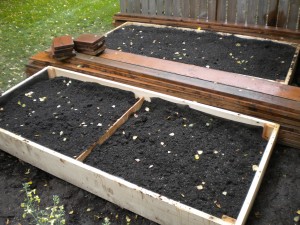 Pretty beds filled with good soil! (And extra wood from the deck that we are going to use for stairs in the spring).

Since the gross rocky fill is useless, we had to have dirt delivered. (Did you know you can have dirt delivered?) A nice person in a dump truck dropped 4.5 cubic yards (over 4 tons) onto tarps on our driveway. We then moved it by wheel barrow into the boxes.

I did use the larger rocks from the fills to make pretty rock paths all along the edges of the boxes. The fill was used to level out a dip in our neighbor’s yard.

Before winter fell, I transferred my chives (an annual) into the herb box and the strawberry plants into the fruit box. Then we mulched them with straw and waited for winter.

I can’t wait until spring when I can fill the boxes with plants!

Strawberry plant we will see you in the spring!

A few months ago I started reading about vermicomposting and really wanted to try it. Growing up my parents always had a compost pile (actually three bins in rotation) in our back yard. My mom has a picture on her blog. (Yes my mom has a blog, yes I helped her set it up, yes she did a multi week series of pictures of manhole covers, yes we have suggested she needed psychiatric help, and no she did not go.)

In Anchorage it is mostly too cold to compost (something about the piles freezing and the chemical process stopping). Plus I’m betting that our condo association/home owners group has a rule against compost bins. But I hate throwing away veggie and fruit scraps. So vermicomposting seemed like the perfect solution. It can be done indoors in smaller quantities, supposedly doesn’t smell, and it has a cool name that doesn’t at all sound weird. Vermicomposting is cool, modern, and eco friendly. Worm farm is weird and hippy.

I am weird and a hippy (as I am discovering more and more), but I’d like to put prettier labels on it when I can. And thus a couple of weeks ago, I started my worm farm/vermicomposting adventure.

Hilary is happy to do some drilling. Naturally we chose the DIY route.

Oh, did I say we? This became a group project. I got my hippie enabler friend Hilary (some day our husbands are going to stop letting us talk to each other, we feed off each other too much) and her housemate Sarah to go along with this. Or I was tagging along with them. Whatever. Group project time!

Sarah is not afraid to drill.

First we drove up to Eagle River to buy worms. We bought a bags of worms from the Worms and Stuff lady. She was fascinating to talk to and a great source of information. Her website is really helpful too. She sells the fancy expensive worm factories and has instructions on how to make a different version. Plus she confirmed that the worm factories don’t at all smell. Admittedly that was one of our biggest fears since we were keeping things in our house. (In the garage it gets too cold, not cold enough to kill the worms, but cold enough they go into near hibernation and aren’t actively chewing up food scraps.) 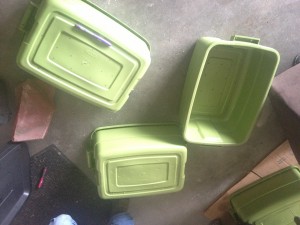 We used a marker to decide where to drill holes.

While at the worm lady’s house, we could feel the worm bins and see what the actual appropriate moisture level is. (Too moist and the worms drown, not moist enough and the worms can’t breathe through their skin.) You’re aiming for just wrung out sponge. Her worms are also sold in Anchorage at Alaska Mill and Feed.

After the worms were acquired, everything else was purchased at Home Depot. Two rubbermaid 10 gallon tubs and a broken paving stone each. We convinced the Home Depot guys that because they couldn’t sell the broken paving stone and they would just have to throw it away, to sell it to us for a great discount.

David was gone for the weekend (hunting) but left behind a drill for me. This involves one size of drill holes in the bottom and another on the sides and the lids.

After marking off the bins, we took turns drilling. All told it was probably ~100 holes per bins, four bins total. 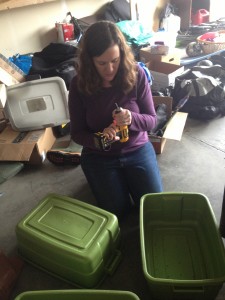 Look at how good I am at changing the drill bit. Ignore the messy garage. We are working on it.

We burned through two batteries and I had to wait to drill the last 30 or so holes until the battery recharged. I showed David what I had done and he told me if he had realized how much I would be drilling he would have left me the 20 volt drill instead of the 12.

Yeah, apparently he thinks my projects are little and cute. Oh well. To be fair I did have to have a quick refresher course on how to use the drill.

After all the holes are drilled you need to shred up a lot of bedding. I meant to bring home shredded paper from work, but forgot. Instead I hand shredded newspaper which probably is safer for the worms. Some people on the internet are very concerned about the dyes used in ink cartridges. Or something. Whatever, it is all recycling.

I appreciate that this newspaper ad from a grocery store told me it was safe to compost! Saved me worrying about “toxic dyes”.

Take the lid that doesn’t have holes in it, put your broken paving stones on top. This will create a drainage area if it gets too wet.

And we are going to do the rest of this photo essay style. You really should read the linked instructions above for a full instruction.

Fill the bottom with your newspaper, wet it down with a spray bottle, and add in your bag of worms (that have some shredded paper and dirt already). 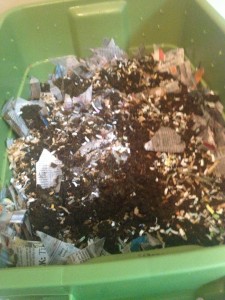 Worms happy in their new home.

(Sorry for the blurry iphone photo), here’s the stuff to make it work.

I used the box from our full circle organic produce delivery, which is supposedly super compostable, to put on top of the worms before the second tub. It creates a barrier for smells and to keep the worms from exploring too much. Eventually they’ll eat through it, but that will be time for them to move on anyway.

And I’ve been doing this now for about two weeks. They love our coffee grounds and it isn’t smelly at all. The trick is to never add in meats or animal products (except egg shells that are first baked in the oven) and thus avoid smells. The egg shells balance the ph of the system, baking them keeps it from getting that rotting smell. Yay composting! It just feels so good to not throw away veggie scraps and coffee grounds. Next up on the hippie agenda, garden boxes and an update into my natural hair care path.

The final system, not too big, not too smelly, not off putting to husbands and guests who don’t even know what it is until I tell them.